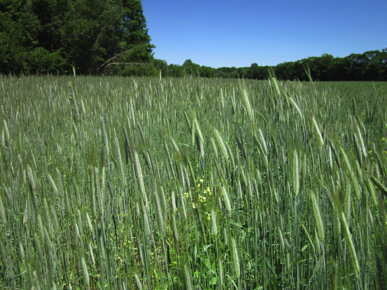 Winter Rye (Secale cereale)Benefits:Winter Rye is the most popular winter cover in the Northeast. It is a winter annual grass that grows up to 5′, and is extremely frost hardy, adaptable and competitive. It develops an extensive root system in relatively short amount of time, which is why it ranks highly for its benefits to reduce erosion and compaction, increase soil health and organic matter, utilize (scavenge) excess nutrients, and suppress weeds. The deep extensive root system helps prevent compaction and improves soil tilth. Tolerates pH from 5.0–8.0.

Best planted in early September to give good growth before winter dormancy, but may be planted at higher seeding rates as late as mid-October. Sold by the pound-seed at 100–200#/acre, 3–5#/1000 sq ft. Apply at higher end of rate range for later planting. Note: if planted later in the fall, you may have to wait longer into the spring to effectively terminate it if waiting until plant maturity to terminate (See Mirsky et al. 2009, figure 4  https://acsess.onlinelibrary.wiley.com/doi/epdf/10.2134/agronj2009.0130

The best way to terminate Rye in the spring is a subject of debate. Decomposed residue exudes allelopathic compounds that inhibit weed growth; and may also inhibit germination and growth of subsequent crops, so some say it should be incorporated into soil at least 3 weeks before planting. Direct-seeded crops with small seeds are more susceptible to rye’s effects than large-seeded crops and transplants. In some cases, it will come back after first being tilled in and requires multiple tillings to die completely, Drier soil conditions for tilling increase its likelihood of termination. Many farmers terminate it with herbicide before planting into it or tilling it into the soil. The flowering stems can simply be broken or mowed as/after they produce pollen, and this will kill the plant as well. This strategy is ideal for farmers practicing no till methods, or for gardeners hoping to leave residues as a mulch.

Can be grown with our crimson clover  but should be planted before October and with reduced seeding rate for optimal co-establishment.