View cart “Common Oats- Organic Seed” has been added to your cart.
Out of stock 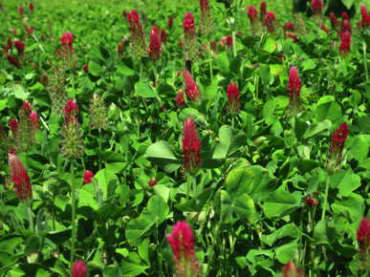 This legume cover crop grows quickly even in cool weather, which makes it one of the best legumes for colder climates like the NE. It can form a dense ground cover and root system which helps prevent erosion, increase soil organic matter, and suppress weeds. It provides a source of nitrogen, via its association with nitrogen fixing bacteria, and if grown to flowering stage it also provides pollinator habitat.  It is not persistent when removed, compared to winter rye or hairy vetch. It grows up to 18″, and flourishes in most well-drained soils.

Best planted by early September, mid-September at the latest. The later it is planted, the less resilient it will be to winter frosts. Seed at 25-50#/acre, ½-2#/1000 sq ft. Apply at higher end of rate range for later planting.

N-Dure Alfalfa & Clover Inoculant provides a source population for the nitrogen-fixing bacteria Rhizobium, which forms an association with clover roots to allow them to create their own nitrogen source. Clover seeds will be provided with the correct amount of inoculant for the order of seed. It should be added to the seeds and moistened before planting.

Susceptible to winter-kill (Survives a 28° frost, dies at hard frost), though it can survive MA winters especially if planted by September 1. Thus it makes a good dead mulch in spring. If alive in spring, mowing after initial bud stage will kill it. Surviving plants can also be tilled in, manually removed (weeded), or raked out, though if tilled in early stages of growth it may regrow.

Grows well with most cereal grain cover crops, like our Winter Rye or Oats.